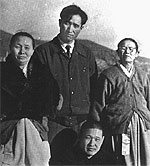 Reverend Moon with some of his first followers in South Korea during the Korean War. The effects of nearly three years in a Communist labor camp are still etched on his face

Reverend Moon's 1951 "headquarters", a shack he built from discarded US military ration boxes as a Korean war refugee in Pusan, South Korea. 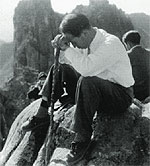 Reverend Moon's birth in what is now North Korea 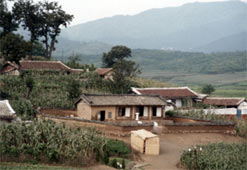 The house Rev. Moon was born at (North Korea)

Sun Myung Moon was born on January 6, 1920, into a family of farmers that had tilled the land for centuries. As a boy he studied at a Confucian school and was a keen observer of the natural world. Around 1930, his parents became fervent Christians--Presbyterians--and the young Sun Myung Moon became a Sunday school teacher.

At that time, Japan ruled Korea and was trying to force the practice of the Shinto religion onto all Koreans.The religious intolerance of the Japanese regime was one facet of the contempt they held for the Koreans, a people they believed to be inferior. The Korean people were subjected to forty years of humiliation and cruelty as part of Japan's Greater Asian Co-Prosperity Sphere. Growing up oppressed in his own land, Sun Myung Moon learned early the pain of injustice, whether among his own people or at the hands of the Japanese rulers.

The young Moon became intensely aware of human suffering and the failure of humanity to create a loving and just world. He sought to understand why people suffer and how suffering can be ended. From going to church, he knew that religion addressed the fundamental human condition and promised an ideal world to those who obey God; but he saw that established religions, although centuries old and based on scriptures offering revelatory insights, were, in practice, unable to answer many of life's questions or solve the deepest problems facing humankind. Troubled by the immense gap between religious ideals and the actual state of the world, he began his own ardent pursuit of solutions through a life of prayer and study.

Early Easter morning 1935, Jesus appeared to the young Sun Myung Moon as he was praying in the Korean mountains. In that vision, Jesus asked him to continue the work which he had begun on earth nearly 2,000 years before. Jesus asked him to complete the task of establishing God's kingdom on earth and bringing peace to humankind.

The young Korean was stunned by this encounter, and especially by the request that had been made of him, and at first he refused. However, after deep reflection, meditation and prayer, he pledged to take on the overwhelming mission.

After personally accepting Jesus' call, the young Moon set out to discover the meaning of this unusual call. If Jesus called him to complete his mission, it meant that Jesus' mission was incomplete. Was not salvation through the cross all that humankind needs? What was it that Jesus had left undone on earth? If sin is not completely solved, then what is the actual root of sin?

Sun Myung Moon ceaselessly studied the Bible and other religious teachings in order to unravel these mysteries of life and human history. During this time, he went into deep communion with God and entered the vast battlefield of the spirit and flesh. Through denying his personal desires he overcame temptations of knowledge, wealth and physical pleasure. He came to understand God's own suffering and His longing to be reunited with His children. He learned the difficult steps that humankind would have to take in order to return to God and establish true peace on earth. After receiving his commission from God, he knew he could not succeed in his task without a profound understanding of the Creator and His creation. He intensified his quest for the truth, spending days and nights in passionate prayer, rigorous fasting and study. His method was to posit specific questions, research answers in the physical and spiritual worlds, and then seek confirmation for those answers through prayer. On several occasions he was guided directly by Abraham, Moses, Jesus, Mohammed, Buddha and other saints and sages of all faiths, who met him in spirit and contributed to his understanding of God and the complex history of God's relationship with humankind. By the age of 25, he had developed the fundamentals of the Divine Principle and Unification Principles.

Continue to part 2: The Early Ministry