Many people are trying to tell you false things, but what I tell you I have learned from God. I thought I would die, and now am talking about these things in Oslo, the home of the Nobel Peace Prize, who would do these kinds of things, I would because these things are true.

Reverend Sun Myung Moon is the founder and spiritual leader of the Unification Church and its institutional successor, the Family Federation for World Peace and Unification. The broader Unification Movement includes foundations and enterprises operating in the realms of religion, academia, the arts, media, sports, agriculture, technology, ocean enterprises, and more.

Born into a farming family in 1920 in what is now North Korea, Reverend Moon became a Christian at age 10 at a time when occupying Japanese forces brutally persecuted Christians. He received a calling from Jesus in 1935 and subsequently pursued a course of prayer and study of Christian and other scriptures. During this period of spiritual search, he continued his secondary education in Korea and later studied electrical engineering in Japan.

He began his public ministry in Communist-occupied North Korea by sharing new insights into God’s Will and Jesus’ mission. Communist authorities imprisoned the young preacher in the late 1940s, severely tortured him, and sentenced him to the infamous Hungnam labor camp, where he remained until 1950, when authorities released him due to the advance of UN forces.

Reverend Moon founded the Holy Spirit Association for the Unification of World Christianity (HSA-UWC), which subsequently became known as the Unification Church, in 1954 in Seoul, Korea. His teachings, known as the Divine Principle, draw upon biblical truths and Eastern wisdom to present a comprehensive view of God’s ideal plan for humanity, the cause of sin, and the history of God’s work to restore the lost ideal. 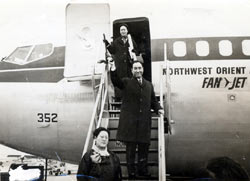 Nurturing a growing community of faithful disciples in Korea and Japan, Reverend Moon sent missionaries to the United States in 1959. He married Hak Ja Han in 1960 in the first of the sacred wedding ceremonies that have become the hallmark of the couple’s ministry. Unificationists believe Reverend and Mrs. Moon have succeeded in becoming the first True Parents, having established a God-centered family and lineage. During the 1960s, large numbers of people joined the movement in Korea and Japan, and missionaries brought the message from America to Europe as well.

Reverend Moon views the United States as a microcosm of humanity uniquely positioned to advance world peace. He and Mrs. Moon came to the country in 1971 to spread his optimistic vision and stimulated a period of rapid growth in the movement throughout the early 1970s. Central to this vision was the promise of an enhanced personal relationship with God through individual devotion, "blessed marriage," and intercultural families dedicated to bringing peace to the world.

For more than three decades Reverend Moon has been attracting collaborators through conferences that engage participants from all races, religions, and cultures. His ideas have captured the imagination of thousands of clerics, academics, and community activists, who form the core of the Universal Peace Federation founded by Reverend Moon in 2005 as his culminating and overarching peace organization.

Reverend and Mrs. Moon are the parents of 14 children and have more than 40 grandchildren. Their peace mission has been advanced prominently in recent years through the participation of three generations of their family in speaking tours across the world. 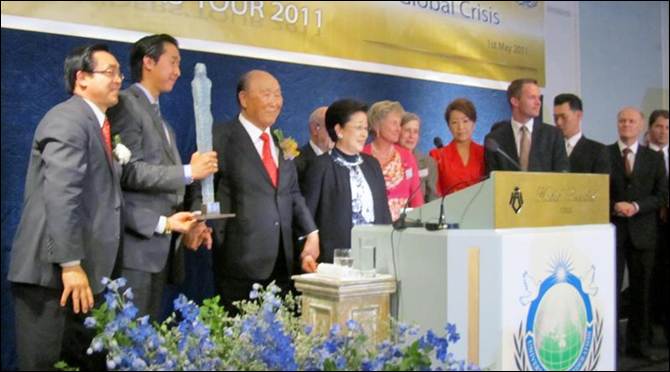 Reverend and Mrs Moon during the European Speaking Tour in Oslo

Dr. Hak Ja Han Moon has dedicated her life to the quest for peace. Along with her husband, she has worked with heads of state, Nobel Peace Prize winners, religious leaders and internationally renowned artists.

In 1968, Reverend Moon established the Professors World Peace Academy in Korea, and in 1972 the first International Conference on the Unity of the Sciences was held. These and similar organizations have attracted the participation of scholars, scientists and leaders in the fields of religion, the media, government and the arts, including numerous Nobel Laureates. Mrs. Moon played a crucial role in all of these developments, where her compassionate friendship completes her husband's challenging vision.

She is the recipient of many international honors and awards. For her humanitarian work and for her contribution to world peace, she has received honorary doctorates from Argentina's La Plata University and the University of Bridgeport, Connecticut. In addition she received the Medal of Brazil from that country's Ministry of Education.

Reverend and Mrs. Moon share a great love of the outdoors. Fishing is one of their favorite pastimes. She was also instrumental in the creation of the Deer Park Equestrian Center in upstate New York, which boasts one of America's finest arenas for equestrian competitions.

They are also patrons of the New York City Symphony, which the New York Daily News acclaimed as "one of America's finest orchestras".

Reverend Moon and his wife recently founded the Universal Ballet Academy in Washington, DC, which trains young dancers in the Russian style with masters from the Kirov Ballet of St. Petersburg. Dancers from the school recently won an unprecedented number of gold medals in international competition. The Universal Ballet Company, which they founded, is now a preeminent classical troupe.